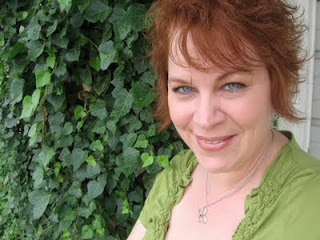 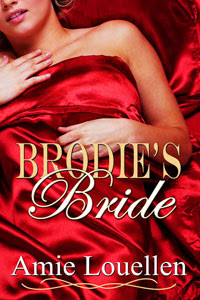 Meet amazingly talented author Amie Louellen! Her book BRODIE'S BRIDE releases today from The Wild Rose Press. Since her main characters, Brodie and Savanna, are busy with "release day stuff," Brodie's best friend Jackson has stopped by for a visit.


It’s been six months since that fateful night/morning when Brodie and Savanna woke up to find themselves married. But as their story goes public today, they weren’t available for an interview. So we have the next best thing. Today we have the other half of HarMac Construction, Jackson McMasters and his lovely wife, Gina.
“If he’s mad about this, I’m blaming it on you,” Jackson asides to Gina, then turns to smile and shake my hand. Jackson is just like described in the book. Blond, polished and wearing an impeccable suit. Dark-haired, dark-eyed Gina is glowing in only the way a new mother can.
“Blame it on me,” she says through her smile. “I’m not afraid of Brodie Harper.”
“Before you two get into a marital spat, let’s get this started.”
Jackson sits down and crosses ankle over knee, his movements nearly elegant. I’ve only met Brodie once before and for a brief time, but it’s so obvious that the two friends are exact opposites. Brodie is dark, a little rough around the edges and Jackson is…not.
“Thanks for coming today.”
Jackson nods.
“Now tell us, you and Brodie have been friends a long time, right?”
“Since elementary school.”
“We all met in the third grade,” Gina adds.
“And just what kind of person is Brodie Harper?”
Jackson smiles and straightens his dark purple power tie. “He’s the best kind I know. Salt of the earth, his Pop would say. Loyal, dependable. He’s the one person I’d want to have behind me.”
“Ahem.”
“Sorry, Gina. Did you have something to say?”
“No. Go on.”
“He’s taken care of his grandmother since his Pop died. That alone is a full time job. He has a great love of family and home.”
“I’ve heard that about him. So were you surprised to discover he’d married a stranger after a one night stand?”
“You…could say that.”
Gina laughs. “He was livid.”
“I was worried about the casino contract.”
“He was worried about his friend.”
“It’s just that no one expected Brodie to get married again,” Jackson explains.
“Again?”
Jackson nods. “Brodie was marred once before. His wife left him to go to Hollywood. It’s caused some issues for him, but I think Savanna has helped him through all of that.”
“So you approve of his marriage then.”
“Of course.”
Gina all but snorts. “You weren’t so approving in the beginning.”
“It was a shock.”
“He thought she was a hooker.” Gina shows utter delight in letting this tidbit fly.
Jackson coolly raises an eyebrow. “So did Brodie. She was dressed a little—“
“Don’t say it,” Gina warns.
“Well, she had decided to disguise herself and follow her fiancé to find out if he was up to no good—“
“Which he was,” Gina adds.
“—and she ended up married to Brodie instead.”
“And his wedding night was also your wedding night.”
“That’s correct, but that’s all the details I’m giving on that. If you want any more, and you’ll have to talk to him.”
“Just where is Brodie today?”
“He had other business to attend.”
“He’s out flying the Cessna with Red Sullivan, the casino owner. Now that Savanna has gotten over her fear, she’s making Red teach her how to fly the plane. Brodie won’t let her go up without him.”
“A casino heiress flying a plane, that would be something to see.”
Gina’s phone chimes and she holds it up for Jackson to see. “Time to get Rosie.”
Jackson stands and reaches out to shake my hand. “Sorry to cut this short, but duty calls.”
Fatherly duty.
Who knows maybe soon, it’ll be Brodie’s turn on baby patrol. One can only hope.
Amie Louellen--Brodie's Bride
Available 6/24/2011 from The Wild Rose Press


Amie Louellen loves nothing more than a good book. Except for her family…and maybe homemade tacos…and shoes. But reading and writing are definitely high on the list. When she's not creating quirky characters and happy endings she enjoys going to little league baseball games and boy scout meetings. Born and bred in Mississippi, Amie is a transplanted Southern Belle who now lives in Oklahoma with her deputy husband, their genius son, a spoiled cat, and one very hyper beagle.