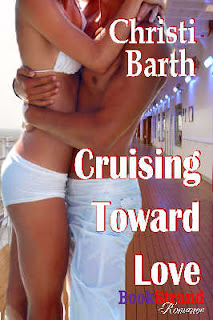 I'm thrilled to host my good friend, fabulous author, and critique partner Christi Barth today for a fun post about cruises and love. She's a gal who loves her hubby, and loves to write. I hope you enjoy getting to know her better today through some Q&A and a wonderful excerpt from her newest release, CRUISING TOWARD LOVE.

One of the things you like your readers to know is that your husband is “absolutely the best husband.” How did you meet and how has he influenced your writing?
We met at a callback to play the romantic leads in a Gilbert & Sullivan operetta. We pissed each other off that day, but got the parts and became great friends by the time the production closed. He then auditioned for another show just to be near me! He doesn’t have any influence on the characters I write. After all, why would I want to share the perfect man with the rest of the world? There’d be a line at my front door. He does, however, support my writing career 110%, in innumerable ways. I wouldn’t be at this point in my career without him.

2. You’re a big supporter of local theatre. How has your ongoing interest in theatre contributed to your books and characters?
To say I have a flair for the dramatic would be putting it mildly. No doubt my years as an actress exponentially enhanced my adoration of a happy ending and a need to put a smile on people’s faces. In my book the characters are realistic, but the situations might be enhanced a shade or two from reality to punch it up a bit. The theatre teaches you to go big!

3. CRUISING TOWARD LOVE takes place on a cruise ship. Have you ever been on a cruise? If so, what’s your best “cruise advice” for someone who’s never been?
I’ve been fortunate to cruise twice, and I can’t wait to go again. They treat you like royalty, and you see amazing things. My first piece of advice would be not to wait – cruises aren’t as expensive as you might think, so go book one! But the real cruise insider tip would be to not waste space in your luggage with packing beach towels for your shore excursions – the ship will provide EVERYTHING you need. You’ll need that space for souvenirs…and duty free local rums, of course.

4. Zoe, the heroine in CRUISING TOWARD LOVE, has a very colorful family. What inspired the secondary characters in this book?
They’re definitely not from real life, because I’m an only child. I thoroughly enjoy the interplay of secondary characters in the books that I read, so I wanted to be sure to interject it into everything I write. Kind of like buying presents for people that you’d like to keep for yourself. They are also a handy way to introduce humor, which I try to infuse into every book. My main characters are a cup of coffee. The secondary characters are the cream and sugar. You wouldn’t want to drink an entire cup of sugar and cream, but they are enjoyable additions to the main event.

5. Nate, the hero in CRUISING TOWARD LOVE, is an Army medic. What sort of research did you have to do to make this character and his background authentic?
Probably not enough, I’ll admit. I did research Army bases to figure out where he could’ve been stationed for the past ten years. My responsibility as an author is to make up the plots and characters, but to get all facts possible correct. So I do strive for a high level of authenticity. At a picnic, 2/3 of the way through writing the book, I mentioned to a friend who spent years in the Army something about Nate’s gun. She immediately corrected me – soldiers always refer to their ‘weapon’, never their ‘gun’. I never would’ve discovered that through research. So helpful, not to mention serendipity that led us to sit next to each other to share the mustard.

Want to ignore the leaf piles and biting wind by indulging in a funny, sexy romp through the Caribbean? Of course you do! So dive into the pages of Cruising Toward Love by Christi Barth. Here’s a blurb to get you started. If you really want to get your feet wet, there’s an excerpt below the banner.

Can an unexplained breakup and ten years of heartache be cured by the romance – and endless buffets – of a tropical cruise? When her sister is left at the altar, small town librarian Zoe Balis jumps at the chance to take the bride’s unused ticket for the honeymoon cruise. But she didn't count on sharing a cabin with the man who broke her heart ten years ago!
Army medic Nate Hyatt never told Zoe goodbye when he enlisted - or the real reason why he dumped her on prom night after a year as high school sweethearts. And he never stopped dreaming about the girl he left behind. Could this voyage be his chance to fix the worst mistake he ever made? After all, a Caribbean cruise should be romantic… if he can convince her to move past ten years of bitterness and hurt.
Once aboard the luxury liner, Zoe befriends a bored Internet mogul with more heart than tact. Nate vents his problems to a ship’s photographer battling PTSD. The four team up on an island hopping treasure hunt. The stakes grow higher with each of Zoe’s mysterious brushes with death. They race to discover why she's a target and who's behind it, while still competing in the treasure hunt. Zoe’s never gotten over her first love, and is tempted to let Nate back into her life. But she already lost him once. She’s not willing to risk loving a man whose career keeps him in a combat zone. Can Nate breach her defenses and suture her broken heart? Grab a deck chair and see if they survive the stormy relationship seas as they cruise toward love!


"Did you stop kissing me because you weren’t enjoying it? You see, I’ve dealt with the first time you rejected me, when you left all those years ago. There’s no need to rehash the past. But I don’t think I could bear you rejecting me a second time. So I have to know—did you not take me to bed the other night because I didn’t turn you on, or was it because I somehow wasn’t good enough at it?"
The world stood still while she waited for his answer. Zoe focused on the squawk of sea gulls and the muted slap of the surf at the base of the wall. The lyrical lilt of Spanish from the group of teenagers passing by. A low buzz which must be some exotic insect in the shrubbery along the path. Every sound in her immediate vicinity rang with absurd clarity—except the sound she waited on with bated breath—Nate’s reply.
"If you still don’t want me, just say so, damn it!" she burst out.
Was it anger that hardened the lines of his body? Disinterest? Annoyance? Zoe couldn’t get a read on him. Nate advanced slowly. She backed into the turret, the space tight and cramped even for her stature. Built for the far shorter men of an earlier century, Nate had to duck his head as he edged ever closer. His sheer presence commanded as much area as his physical body. Something, some emotion rolled off him in waves, shimmering like heat above asphalt on a summer day. Why couldn’t she tell what was going on in his head?
"The sky is blue," said Nate, his face separated from hers by only a breath.
Huh? "Is that a military thing? Are you talking in code?"
"The sun rises in the east. Play with fire and you’ll get burned. These are all absolute truths. Indisputable facts. Well, there’s one more absolute you need to file away in your mental card catalog."
Nate brought the lower half of his body so close Zoe felt the heat radiating from his legs. Despite the heat, her goose bumps had goose bumps. The anticipation of his touch brought her every sense to high alert. He raised his arms up, planted his hands on either side of her head to cage her in place. Then he tilted so his forehead bumped hers. Her field of vision narrowed to the indigo sea of his eyes, pupils flooding black in the shaded darkness of the narrow turret they shared.
"I want you, Zoe." He forced the words out in a heavy rasp. "I wanted you the day we met. You wore a red ribbon in your hair, dropped a stack of books on my foot, and apologized adorably for ten minutes. All I could think of was wrapping the ribbon around my hand to pull you in for a kiss. I wanted you the first time we kissed, on the bridge in a storm. One by one, I licked off every raindrop that clung to your skin. I wanted you when I saw you covered in mud last Friday. Wanted you badly enough to crawl right into the mud to be with you. I want you now, and I will always want you."
Zoe let her eyes flutter shut in preparation for a kiss. Such a heartfelt, utterly romantic speech could only end one way. Just as whipped cream hungered for a cherry, his words demanded to be topped off by a kiss. She didn’t care about the past. With a handful of sentences he’d put her insecurities to rest. Nate dazzled her, and she was ready for more.
What was taking him so long? From beneath her lashes she snuck a peek. No Nate. Hoping the knees he’d melted to jelly would hold her, Zoe scrambled out onto the dirt path. Twenty strides ahead, Nate bellowed at her over his shoulder. "Hurry up. We don’t want to miss the reading of the clue."
From confusion to relief with paper hearts dancing overhead...right back to confusion, all in less than five minutes. Zoe trudged after him with one thought uppermost in her mind—now what?
For more information and purchase links, please visit www.christibarth.com