Love ghosts? Zombie? Vampires? Everything paranormal? Me too!
This year will be the first year ever for Hallowread in Ellicott City, MD. This small town is well-known for being a very haunted (and fun) place, so what better spot to hold a 3-day reader event. It all takes place Friday, October 25th-Sunday, October 27th. It's a book convention for authors and fans of all sorts of paranormal books.

Events include a ghost tour, steampunk tea, author panels, a horror movie, a live performance of Dracula, and an author signing. A convenient shuttle will escort you to all the awesome places.

I'll be on two author panels, and giving away swag for my upcoming ghostly release, SIDELINED AFTERLIFE. Yep, that's right. The book isn't even out yet, and we haven't even done an official cover reveal, so participants at Halloread will be among the first to check out Hunter and Veronica, the hero and heroine of the third book in the HAUNTINGS AT INNER HARBOR trilogy.

A sneak peek out some of the cool stuff I'll be giving away: 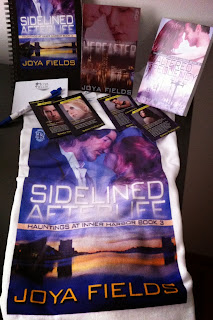 For ticket information, please visit the Hallowread website Thanks for stopping by and hope to see you there this weekend!
Posted by Joya at 8:30 AM No comments: 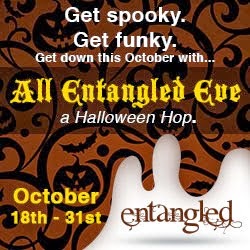 Check out lots of other All Entangled Eve posts and authors here and thanks so much for stopping by!!
Posted by Joya at 11:52 AM 15 comments: 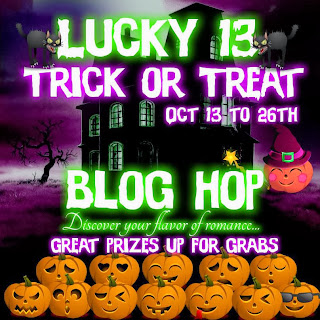 Happy Halloween! What's your favorite part of the festivities? The costumes, the candy or the decorations and haunted houses/trails? However you have your fun, hope you'll scroll down to enter to win some great prizes as part of our Lucky 13 Blog Hop.

For me, it's the decorations. I love hanging lights, carving pumpkins, and displaying all sorts of scary creatures. For years, we had a haunted trail on our property. It was soooo much work, but it was sooo much fun. I think it's my dad's fault that I love decorating so much. When I was a kid, on Halloween night he would hang a dummy from a tree with a strap. And then every time a trick-or-treater came up our sidewalk, he'd make a scary noise and then drop the dummy. Kids loved it! They'd come back to our house two or three times, I think.

My experiences with Halloween are part of the reason I love writing about ghosts! They're mischievous, a little (a lot?) scary, and very mysterious. That's what makes them so fun to write about. My trilogy, HAUNTINGS AT INNER HARBOR, features a 100 year-old apartment building in downtown Baltimore. Imagine the ghosts that residents have to deal with! Bad ghosts...monster ghosts...and even a matchmaking ghost. I'm thrilled to announce that the third book in the series will be releasing very soon. The first two are available now! Hope you'll check them out.


And Now for the prize information:
Joya's prize for this blog: Follow this blog and leave me a comment that you've followed and you're entered for a chance to win an Ebook copy of ALTERED FREQUENCY, and a swag package for SIDELINED AFTERLIFE that includes a T-shirt (size XL), pen and notepad. Open to International. Grand Prize information:
Possible Prizes:
Kindle PaperWhite, if we have enough entries 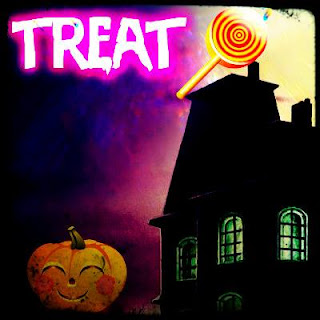 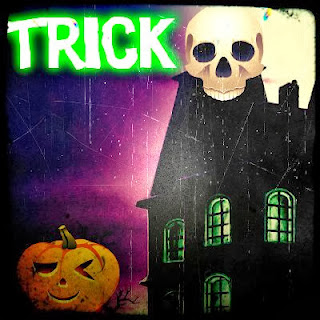 ·      Hereafter by Joya Fields
·      Fight or Flight by Natalie J. Damschroder
·      Silken Edge by Lacey Paige
·      Sleepy Hollow Dreams by Taryn Kincaid
a Rafflecopter giveaway
Find more authors and prizes for Lucky 13 Blog Hop by clicking on any of the links below! Have fun and good luck!!