Claire Ashgrove: The Most Enjoyable Aspect

Welcome Claire Ashgrove! Claire and I were "release day twins" in December and I got to know and love her writing. I'm so glad she could be here today to chat about how she broke her own rules to write her newest book. You'll be glad she did! Be sure to enter her contest (details below) and check out her web site. 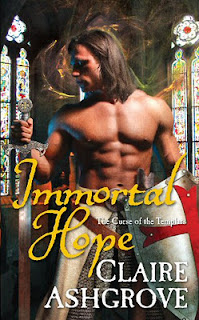 The Most Enjoyable Aspect
For every time I’m asked, “What was the most challenging aspect?” I’m asked “What was the most enjoyable aspect?”  Often, in an interview setting, these two are asked back-to-back.  Equally as often, I have to really dwell on the book to come up with an answer to either.  Not so much this time around.


So what was the most enjoyable aspect of writing IMMORTAL HOPE?


Quite frankly, as clichéd as it may sound, it was the writing of the actual words.  The thoughts that brought my characters to life.


You see, I’d spent the better part of a solid year researching and letting the base idea percolate.  I waited until the story jumped up and demanded, “Write me now!”  When that happened, I was in the middle of another novel, and I set it aside – something I never do.  But ’s story demanded I put everything else on hold and write it right now.
Write, I did.  And boy did those words fly.  I had the prologue written in less than an hour, and the first chapter finished two hours later.  I had a whole contest entry finished in one setting.  While I do write fast, that’s even fast for me.


It really was like all the words had bottlenecked, all the reactions, all the stuff that was going on in the book.  I had the series outlined, but I didn’t have this book outlined according to my usual, detailed, chapter-by-chapter breakdowns.  In fact, IMMORTAL HOPE flowed so freely that I never did stop and outline what would come next.  My fingers were in a race to keep up with my brain.


And the brain was in overdrive, spurred on by the euphoria of setting free all this research, this planning, this “oooh, what if I did…”
So trite, clichéd, whatever you want to call it, the truth is, of all things that I enjoy about IMMORTAL HOPE (and there are many!), it was the ability to compose what had been processing for so long.  (As an aside – that other book?  It was a terrible pain to go back to and finish.  The key reason why I never set one down until it’s finished.)
With all that said, I’m going to leave you with a peek at one of my favorite scenes in IMMORTAL HOPE:
~Claire


He took a deep fortifying breath at Anne’s door. A small portion of his soul demanded he let himself inside and take the liberties he would have enjoyed had she wandered into his life nine hundred years ago. Whilst he shared the residence with many others, the simple fact remained, she resided in his house. Once he had dreamed of such a circumstance. Now the fantasy only created a bitter taste in his mouth.


Resigning himself to reality, he knocked twice upon her door.


She answered as he lifted his hand for the third, concurrent rap. Briefly, she stared, bewildered. Then, her gaze fell to his armload of supplies, and her porcelain features lit with such delight a fist clamped around ’s heart.


The whimsical quality of her voice, the gratitude that turned her words into music, swelled his chest. Damnation. She had turned him as soft as butter. This trial of loyalty would surely be the death of him.


He set the bags down, unwilling to look at her for fear she would see how deeply she affected him. “I brought what I thought you might desire. Should you find something missing, we shall discuss it in the morn.”


His back to her, he closed his eyes. The touch of disappointment that fringed her question disturbed the accursed hollowness in his gut. “Aye.”


Before he could fully shrug off the thick straps digging into his shoulder, her hand settled against the small of his back. “I’d hoped you might stay with me for a while,” she murmured.


Her fingertips slid up his back, warming his skin. As he righted himself, she ducked under his elbow and looped her arms around his neck. Stepping in close, Anne pressed her body to his.


Everything inside coiled tight. Her warmth, the feel of her breath upon his neck, the perfume in her hair, she overwhelmed him in a heartbeat. He battled with the urge to slide his arms around her waist and draw her even closer. The longing to capture her mouth and drink from her honeyed lips assailed his senses with the force of a battering ram. Like a strangled man desperate for one gulp of fresh air, he disentangled himself from her embrace and took a step away.


He knew only one way to combat the fierce desire she awakened. “I must fight tonight.” 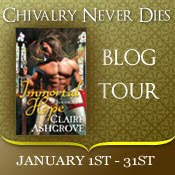 
Claire will be giving away a $25 Amazon.com gift certificate to one randomly drawn commenter during the tour, and a second $25.00 Amazon.com gift certificate to a second randomly drawn commenter at the end of the tour.  Be sure to follow the tour and comment; the more you comment, the better your chances of winning! Click the Blog Tour badge for a complete list of blog stops.


CENTURIES AGO,
Templar knights defied the archangels and unearthed the copper scroll, revealing the gates to hell. Cursed for their forbidden act, they forever roam the earth protecting mankind from evil. But darkness stalks them, and battles they fight bring them ever-closer to eternal damnation. One promise remains to give them salvation – the return of the seraphs.

Embittered by his purpose, Merrick du Loire must honor an ancient pact and bring peace to his cousin’s soul. When he stumbles upon history professor Anne MacPherson, he discovers she possesses a sacred artifact that marks her as a seraph. Duty demands he set aside his personal quest and locate the knight she’s fated to heal. As he struggles with conflicting oaths, Anne arouses buried hope and sparks forbidden desire that challenges everything he’s sworn to uphold.
Anne has six weeks to complete her thesis on the Knights Templar. When takes her to the Templar stronghold, he presents her with all she needs—and awakens a soul-deep ache, he alone can soothe. Yet loving comes with a price. If she admits she's destined for him, her gift of foresight predicts his death.

Thanks for stopping by today, Claire, and best wishes for continued success with your books!
Posted by Joya at 9:46 PM

Thanks for stopping by today, Claire! Loved your post. I agree it's a good rule not to stop writing once you've started a book. But in this case, I think it turned out to be a good thing! :)

Claire, love your favorite scene! Will try to order my copy of the book later today. I read so many good things on your book tour so far, that I just have to get it.

Claire, Isn't great when the words just flow without conscious effort? I enjoyed your blurb and excerpt. I've added IMMORTAL HOPE to my TBR list. :o)

Love that favorite scene of yours. Can't wait to read this book. Thanks for the blog hop.

Morning all! I'm glad you're having fun and enjoy what you're reading! This being the first blog-tour I've done, my deep concern was that it would get stale for participants.

Joya, thanks again for having me! Dropping a book mid-stream? I'll never do it again. But I am glad I did.

That was a great scene, loved reading it. Thanks for this fun blog hop

It awfully sounded to me like Claire had a caffeine overdose and got electrocuted to boot... and Immortal Hope got born :D

Great post Claire! It's always good to at least try to finish what you start.

This one is so much different than your race horse novel (which I have and loved!)

Oh, this sounds like fantastic story. And the cover is nice. ;-)

I have no trouble writing a prologue or the first 3 chapters. In fact, they almost write themselves, but the closer I get to the end of the book, the more slowly I write. And then I freeze up, as if I'm scared to get the end and realize it's all crap. lol!

Thanks so much for sharing your excerpt and the story of your writing process today, Claire.
Thanks,everyone, for stopping by to comment. I hope someone from these comments gets lucky and wins Claire's fabulous prize! :)

I'm new to the tour. What a yummy cover and an enjoyable excerpt!

Cherry -- yup, that would be very applicable to many of my daily adventures :P

Calisa -- Yes, it is a world of difference. Laugh. Glad you liked Seduction, though! This is a bit more complicated, a lot more gritty.

Lilly -- Thank you! Sometimes I really slow down after the first five or so, but often, I'm writing toward that next "I really want to write this scene", so the momentum hangs around. Makes it easier, for certain!

Catherine, welcome aboard! Stick with us, there are still several interviews with the Knights to come, which are my personal favorite blogs.

I enjoyed reading the post and excerpt. That's interesting about the words kinda bottlenecking because they had waited so long to get out.