ASK HER AT CHRISTMAS: A Christmas romance that will warm your heart! #newrelease #romance

It's the perfect time of year for a little Christmas and a lot of romance. Here's a sneak peek at Christi Barth's holiday release. 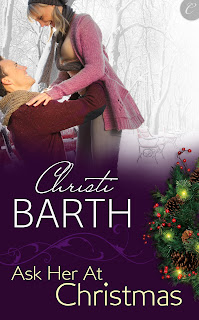 About Ask Her at Christmas


Caitlin McIntyre's heart stops when her best friend drops to one knee and proposes. Kyle Lockhart never once hinted over the years that he has any idea she's in love with him. Not wanting to jeopardize their friendship, she's never let it slip. Good thing, too, since it turns out he's only practicing—he's about to propose to someone else.


A business merger might not be the most romantic reason to propose to a woman he barely knows, but Kyle's determined to win the respect of the dying father who's never seen him as quite good enough. Kyle's always depended on Caitlin's friendship, while trying to ignore the physical response she arouses. So he turns to her when it comes time to craft his proposal, not realizing his decision will affect their relationship, forever.


This Christmas, Kyle and Caitlin get one last chance to admit their feelings for each other, and find a mutual happily ever after, before he commits his life to another woman and Caitlin leaves town and him…for good.


An Excerpt from Ask Her at Christmas


“Caitlin McIntyre, will you marry me?”
Her heart didn’t pound, it slammed to a standstill. It probably left thick red skid marks all over her lungs from how fast it threw on the brakes. Kyle Lockhart, her best friend in the world, was down on one knee in front of her station at the gift-wrapping booth. Which meant it was okay her heart had stopped, because she had to be dreaming. Her heart didn’t need to pump in a dream, right?
There was no other explanation for why Kyle would propose to her. Not that she objected in the least. He was super handsome, in a casually elegant yet decidedly sexy manner. His designer suits covered a body like those of the models in perfume ads, the toned and tanned men who dove into swimming pools shaped like a perfume bottle and came up glistening and wet. Thick black hair set off his blue eyes, and you could probably chisel a sculpture off his sharp cheekbones and jaw. Kyle was yummy from head to toe, and Caitlin had wanted him almost her entire life.
Of course, he didn’t know about her massive crush. She’d never hinted, never let her hands linger for an extra second on his abs when they shared sunscreen at the tiny strip of sand along Lake Michigan they called a beach. She’d never leaned over after splitting a bottle of wine and trailed a finger across the lips she would kill to have touch hers. No, Caitlin played the part of the best-friend-and-nothing-more-than-a-friend to the hilt. Because it would absolutely devastate her if she revealed her longing and he didn’t feel the same way. In a perfect world, guys always made the first move. In Caitlin’s world, it was the only way not to jeopardize the most important relationship in her life.
But how on earth did he leap from never once looking at her with a sexy gleam in his eye to going down on one knee in the middle of the Water Tower Place mall? If all the planets had magically aligned, all the gods smiled down on her and all her karmic balance suddenly tipped to one side, then Kyle might, just might finally see her as a woman and ask her out. Proposing marriage, though, was impossible. Which meant she was either fast asleep in her bed, or she’d slipped and hit her head getting off the El this morning. Ice coated the Chicago sidewalks from an early December sleet storm. A concussion would explain this. Or a hallucination from a brain hemorrhage. That would definitely explain the impossibility of Kyle’s proposal.
So if it was nothing more than a dream, why not enjoy it? Caitlin looked around, but all the other volunteer wrappers were busy putting away their supplies for the night. The wrapping booth was a fundraiser to purchase art supplies for local high schools, so the volunteers ran the gamut from tweens to grandparents. Crowds had finally thinned once it hit eight o’clock. Closer to Christmas that wouldn’t be the case, but with eighteen shopping days left, people weren’t yet panicked. She put down her roll of wrapping paper and looked at Kyle’s beaming face.
“This is so sudden.” She made a point of switching her gaze to his empty hands, folded on top of his knee. “How am I supposed to take your question seriously without a huge, shiny diamond ring to seal the deal?”
The smile disappeared faster than the stack of cashmere sweaters she’d seen on sale at Macy’s this morning. “You are so right. I’m an idiot. Of course, I should’ve brought a ring. But I’ll get one. Pretend I have a ring. Will you marry me?”
It sounded just as magical—and unbelievable—the second time he asked. If this was really a dream, wouldn’t her subconscious have made sure he brought along a one-carat, cushion-cut solitaire in a robin’s egg blue box? Now she leaned more toward concussion as an explanation. Clearly the drugs the hospital gave her must be interfering with her creative juices.
“Kyle, you’re my favorite person in the world. You’re smart and funny and movie-star handsome. What girl in her right mind wouldn’t want to marry you?”
“I agree.” He flashed her the smile that always turned her knees into pudding for a second and stood, brushing off his trousers. “But I’m worried that Monica might not be as cognizant of my charms as the two of us are. That’s why I need you to help me with my proposal. This was a test run.”
Oh. Not a dream after all. 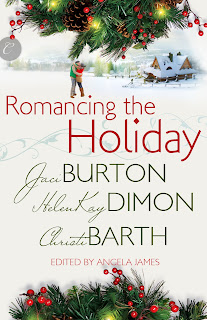 You can purchase Ask Her At Christmas by itself, or as part of the anthology, Romancing the Holiday.