Alicia Dean: Celebrity Names, Cupid, and a Vampire on an Tropical Island

I am thrilled and honored to host author extraordinaire, Alicia Dean to the blog today. She’s one heck of a storyteller and she has two new releases to talk about.
She’s generously offered to give away a copy of BOTH her new stories to a random commenter, so be sure to scroll down and leave a comment! That's all you have to do to enter to win.


Welcome, Alicia! Please tell us a little about yourself
I have been writing off and on ever since I can remember. I wrote my first romance when I was eleven, LOL. I began writing seriously in September of 2001. I have a light paranormal romance short story out called Cupid’s Beau, and a YA Vampire novella called Liberty Awakened, Isle of Fangs Book 1. Weird, because it is my first attempt at either of these genres and I released both in January. I live in , and I love to read, watch MLB and NFL and other television shows. I have two daughters, Lana and Lacey, and a son, Presley (yes…I named him after Elvis). They are all grown but they live nearby and have no families of their own yet, so I get to hang out with them a lot.
Fantastic! Congrats on your two stories, and on your wonderful family. I think it would be pretty cool to be named after a celebrity!
What types of things inspire your writing, Alicia?
Coffee and solitude.
LOL! I can relate to both of those. What would a *perfect* day be for you?
Win the lotto, travel around the world, finding quiet time to write during my journey, and spending time with family and friends. Oh…you said ‘day.’ Never mind the traveling, just the writing, the family and friends thing, and the lotto.
Wow! I think you covered everyone writer’s *perfect* day with that one. Can you tell us about the setting of your upcoming release?
My latest release and my upcoming release are books 1 and 2 from a series. They are set on a tropical island in the . I thought it would be cool to have a different location for vampires to do what they do, and a tropical island sounded like a good idea. I did some research and was drawn to the French Polynesian islands because of the beauty, the culture, the easy access from the , and the mix of nationalities that reside there.
Umm…I think I’d like to visit this beautiful place. Can you tell us about your books and where to find them?
Cupid’s Beau 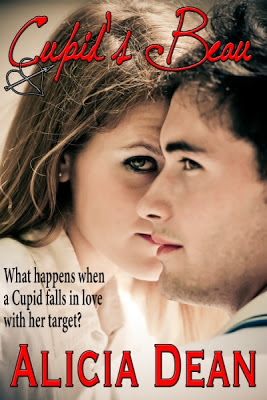 Ivy Pierce is a Cupid who prides herself on doing her job well. Except when it comes to a certain human male, Grant Crawford. Although she doesn’t understand why, each time she’s supposed to shoot her arrow into his heart, her stomach hurts, her chest hurts, and she feels….sad. Cupids are never sad.

Humans who are not looking for love only get three chances to find it. And after Ivy sabotages Grant’s last chance, her boss, Aphrodite, sends her to earth to right her wrong. She has until Valentine’s Day to help him find his soul mate.

But the more she’s around him, the more she wants him for herself, even though she knows that can never be. A Cupid and a human? Unheard of.

As V-Day draws closer, can she sacrifice her own happiness to help the man she loves find his?
Ivy leaned back into the fluffy cloud. Taking a list from her robe, she perused the names. “I have ten more to go. Today. It’s a good thing I like what I do. I’ll be worn out by nightfall.”
Meg unrolled her scroll. “Uh oh.”
“What?” Ivy rose to a sitting position.
“Guess who’s next on my list?”
“Who?”
“Grant Crawford.”
A sharp sting pierced Ivy’s chest. But not the kind experienced when a Cupid’s gold-tipped arrow found its target. This one hurt in a bad way. “Grant Crawford?” she said, trying to be nonchalant.
“Yeah. And this is his last chance. That first time, the woman left him.” Meg shook her head. “So sad. Then, you were supposed to shoot him and missed. Weird. You hadn’t missed in years.”
“Huh, yeah.” Ivy shifted uncomfortably. “Total accident. That’s what it was. Did not mean to miss.”
“Well, luckily, I never miss. Mr. Grant Crawford is about to find his Mrs. Right. And live happily ever after. Come on, wanna watch?”
No, I don’t want to watch…no way. “Sure.” Ivy forced a smile.
This would serve her right. Having to watch. She’d blown the man’s second chance for love. Humans who weren’t seeking love—and Grant Crawford definitely wasn’t, he was about as anti-love as a person could get—only had three chances. Ivy didn’t know what was wrong with her, but the thought of Grant finding love made her feel…yucky. Sad. Bummed. Cupids did not feel bummed. They were the happiest creatures in the universe. She should be pleased that such a handsome man would find love. After all, with his dark hair that curled in little ringlets on the back of his neck, his strong jaw, his beautiful white-toothed smile that showed a dimple in his right cheek, his eyes the color of a gooey chocolate brownie, he should definitely be mated to a woman who appreciated his attributes.
B&N: http://www.barnesandnoble.com/w/cupids-beau-alicia-dean/1045605046?ean=2940015956085
Amazon: http://amzn.com/B00B0JLKP4
Awakened (Isle of Fangs Book 1) 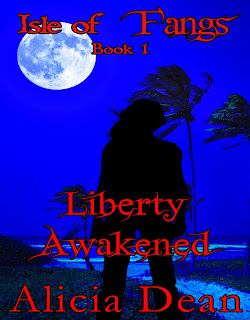 Evil lurks beneath the surface in the beauty of the tropics…
After graduation from her small, high school, Liberty Delacort is looking forward to a fun-filled summer before college. But when the people she trusts the most betray her, and a letter arrives claiming the father she thought was dead is still alive, she jumps at the chance to travel to an exotic island to meet him.
But her excitement is short-lived. Her father is dying, and he doesn’t want her around. In spite of its outward tranquility, the island is filled with danger and ominous secrets. Before long, the secrets begin to unravel. She learns she is a descendant of Van Helsing, the vampire hunter, and she must fulfill her destiny in order to save humans from a faction of vicious vampires. The only man who can help her learn the skills she needs is a volatile, hostile, vampire who wants her off the island.
Will her inexperience lead to her death—and the death of others—or will she rise to the challenge and realize her full potential as a Hunter?

braced her hands on the door, intending to step back. Before she could, Eli lifted his head and whipped it toward her. He couldn’t have heard her, could he? She’d barely made a sound. Maybe he just sensed— Her thoughts ceased when she took a closer look at Eli’s face. He stood in place, breathing heavily. She narrowed her eyes. God. No.  His features were somehow distorted, his skin had a gray cast and looked…crumpled. His eyes glowed red. Something dark and liquid—blood?—was smeared around his mouth, dripped off his…fangs?
“No!” She let out the cry before she could stop herself, then clamped a hand over her mouth. Backing from the door, she shook her head violently from side to side. It couldn’t be. No way. She had to have imagined it.
A sound at the door told her Eli was coming out. She turned and fled. Her tennis shoes slapped the ground, the noise reverberating in her ears along with the word—vampire…vampire…vampire. Oh my God. Vampire… Bats… Drained…

Buy links:
Amazon: http://amzn.com/B00B3N6PMA
B&N http://www.barnesandnoble.com/w/liberty-awakened-alicia-dean/1045658352?ean=2940016048529
Find Alicia Dean on the web:
www.AliciaDean.com
Twitter: @Alicia_Dean_
*GIVEAWAY* Alicia is generously giving a copy of Cupid's Beau and Liberty Awakened, Isle of Fangs Book 1 to one lucky commenter. Just leave a comment below to enter (be sure to remember your email) and Alicia will pick a lucky winner on Febraury 8th.
Posted by Joya at 8:55 PM

Thank you so much, Joya. I look forward to chatting with commenters. I have a family thing today, so my responses might be a little scattered, but I will check as often as I can.

Great to have you here today, Alicia! Have fun with your family.

Thank you, R.T. Hope you enjoy!

Alicia is an amazing writer, editor and friend. She is an encourager as well as a mentor, and I value her opinion more than I can say.

Cupid's Beau is a fantastic little Valentine tale, funny and sweet as can be. I had the privilege of reading it in the early stages, and it's even more fabulous now <3

Thank you so much, Anna! I appreciate your help on the beta read. Your advice was spot on.

So great to have you visit, Alicia! Generous of you to keep the entries open in order for people to comment to win copies of your stories.
Folks...you have until February 8! Just leave a comment to enter to win! Good luck!

Thanks for bringing us new insights to Alicia Dean, Joya. Great books.

Thank you, Kathy! Sorry I'm just now responding. I appreciate you dropping by!

Trying to find the Ultimate Dating Website? Join to find your perfect date.