Check out this HOT!! cover for Vivi Dumas' upcoming release, STOLEN INNOCENCE. This third book in the series won't release until 10/4, but you can get a peek at it today. Be sure to scroll down for information on how you can win an ARC of this multicultural paranormal romance! 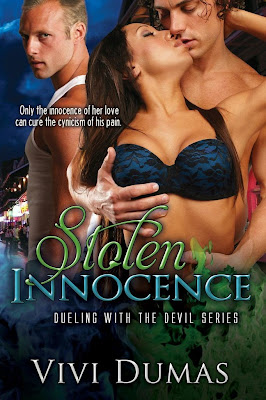 They say ignorance is bliss, but when it comes to love and mating, Charity Lovell wished someone had schooled her on the ins and outs. She fell hard when she saw the beautiful face of the fair-haired demon as he lay broken in Lucifer’s dungeon. Her body ached for him. Her heart cried for him. This had to be her mate, right? Who else could make her trade her soul to the Devil to save someone she didn’t know? Someone should’ve told her love wasn’t quite as straight forward as that.


Damon lived an uncomplicated life, even as the alpha of the Lake Charles pack and the son of Lucifer. He should’ve taken a mate years ago, but held on to the hope of love. Only one female came close to making him believe he still had a chance for happiness. Yet, her heart belonged to someone else. Once again, the feeling is back, stronger than ever. And again, his female has pledged herself to another. Damn demons were ruining his love life. This time Damon plans to fight for what was his and win his rightful mate.

Releasing on 10/14! (That means you still have time to read the first two books in the series.)