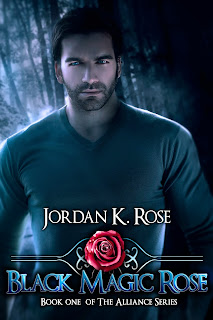 Black Magic Rose
Is it possible to reduce the amount of workplace violence in an organization run by vampires and werewolves? Sofia Engle, the new Employee Relations Manager at Cader House Hospital is about to find out, and she may not like the answer, or the series of firsts she experiences: first human employee at Cader House, first day tardy, first kiss with a dead guy. Well, maybe kissing the dead guy wasn't the worst of it after all.


For nearly 600 years Dragomir Petrescu has fought for The Alliance. As one of the most skilled warriors the Alliance has ever seen he's killed a lot of people and won many difficult battles. But his newest human adversary is turning out to be a worthier opponent than any he's met. Just the scent of her disarms him, never mind her endless policies and silly ideals about civility.


Can he possibly keep her safe from Alliance enemies, hospital employees and himself? The term Employee Relations is about to have a whole new meaning.


Jordan's Bio:
Jordan loves vampires. But if you know anything about Jordan, you already knew that detail. What you didn’t know -- it wasn’t long ago that she began writing about them.
A few years back Jordan received a copy of Twilight from her husband as part of her anniversary gift. By the end of that week she’d read the entire series and moved onto Anne Rice’s Vampire Chronicles. Eight weeks and eighteen vampire books later the idea for her first book, Perpetual Light came to her followed very quickly by Eva Prim.
In October of 2013 The Demon Mistress, the first Eva Prim Novel became available along with four short stories. For continual updates on Eva please join the Snack Of The Week Club at www.evaprim.com.
Black Magic Rose, Book One in The Alliance Series is now available on Amazon, Barnes & Noble and Kobo.
Jordan is a member of the national Romance Writers of America organization and several chapters.
When she’s not writing about one vampire or another Jordan enjoys spending time with her husband, Ken and their lovable Labrador, Dino on the beautiful beaches of Southern Rhode Island.
Find Jordan:
Find Jordan on her website and sign up for her newsletter at www.jordankrose.com.
Follow her tweets on https://twitter.com/#!/jordankrose
Like her Facebook page at https://www.facebook.com/pages/Jordan-K-Rose-Author/307285709309992
Follow her Pinterest boards at: http://pinterest.com/jordankrose/boards/
Friend her on Goodreads at: http://www.goodreads.com/author/show/5751865.Jordan_K_Rose
Posted by Joya at 8:08 AM

Hi Joya. Thanks so much for posting about my new release! :) Jordan