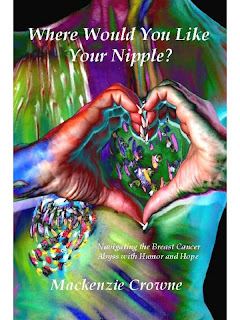 I love the title of this book! Definitely grabs the readers attention. And the book sounds very inspiring, especially for those dealing with breast cancer. All the best to you, Mackenzie! :)

Thanks, Jessica. I love the title too. After laughing my head off when the plastic surgeon's assistant uttered those words, I knew I'd be using them for something. So glad you stopped in.

You are an awesome woman, and I'm proud to be connected to you. Huge hugs and congrats on all your successes, and may your latest book soar to those who need it.

Congratulations on your book and the title is terrific. Handsome had throat cancer six years ago. No, wouldn't wish that on anyone. I like your best four letter word-hope. It gets us through.

Thanks Christine. It's my hope Nipple will ease some of the fear of the
battle too many woman are facing.

Yes it does, Vicki. Hugs to you and Handsome. That's a tough diagnosis full of nasty treatments. I hope he's doing well.

It's great to hear such an uplifting story. I love the spin you put on losing your hair (looking like Dr. Evil) I'm sure that sharing your views will make the journey easier for others.

Hi Mackenzie and Joya.
Great post!
Mackenzie, congratulations on your wonderful new book. I love the cover. The title grabs hold and screams to be read. You are an amazing woman and I just love your spirit.

What are you going to do, Kate? I walked around for months singing "Don't you wish you girlfriend was HOT like me?" LOL Hubby just rolled his eyes.

Aww thank you, Nancy. Isn't the cover gorgeous? The image is called Open Heart and is part of "Faces of Courage" a non-profit funding camp getaways for those with cancer and blood diseases, along with their families. The artist's name is Lisa Scholder. She has a true heart for survivors and it shows.

Very inspiring story. My best friend of 40 years battled breast cancer about 10 years ago. It was a tough time, but she got through it. This topic is very near and dear to my heart. It's wonderful that you reach out to others who are dealing with the fear and sadness of cancer through your words.

I love hearing survivor stories, Alicia, especially those who faced their battle without many of the medical advances we benefit from today. Now, those girls are REAL heroes. High fives, Alicia's friend!

Thanks so much for sharing your web home with me today, Joya. And to all your guests who stopped by. You're the best!

Thanks so much for stopping by, everyone.
Mac! You're a wonderful guest and you're welcome here any time. Thanks for sharing your story and your message of hope and positive thinking. :)