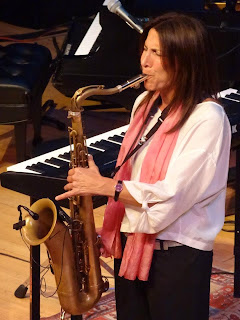 Welcome my good friend Deanna Bogart to the blog today. Deanna is a locally and internationally famous musician who plays boogie-woogie, contemporary blues, country and jazz (which she calls “blusion”). She also makes a guest appearance in my newest release, Hereafter. Rob, the hero of the story, is listening to a Deanna Bogart song as he unpacks.


Without further delay, let me proudly introduce Deanna so you can find out more about her and her music…


Welcome! Thanks for taking time to stop by the blog today. Your music inspires many, many people. What would be the “perfect” writing conditions for you to create a new song?


hmm... I like to think it would be somewhere alone in the middle of the desert with my piano, my horn and lots of manuscript paper. That said,  the perfect writing moments tend to show up at some of the most imperfect times...it comes when it comes. Once I’ve committed to a tune, however, I covet absolute alone time with my dictionary/thesaurus/reference books/metronome until I’m content that there's no wasted note/word or space.
Haha! I can just picture you in the middle of the desert. Sounds like you're very good at listening to your Muse as you create. Do your songs “come” to you over time, or do they usually hit you all at once? How long does it typically take you to write a song?
Yes, and every other way. I’ve dreamed snippets of tunes, I’ve had a melody or lyric line literally haunt me until i surrendered to it...
Some songs seem to be born written, and others incubate somewhere inside for days/months/years 'til their time. Then it takes what it takes. I seem to work very well with an unrealistic, slightly psychotic deadline. I don’t know what this says about me...i time traveled for “said it wouldn’t rain."
Well, I know ALL about deadlines being an incentive to get "creative," I think that means the idea was there, it just needed a little persuasion to come out. haha! You work hard at your craft. What do you do to relax and unwind?
You’ve been performing for many years. Do you ever get nervous when you take the stage? If so, what do you do about those nervous feelings?
I always have stage fright and it’s uncomfortable - but I’m guessing that it’s my way of trying to keep the live musical experience scary and exciting like it was in the beginning. I just don’t ever want to lose those threads of uncertainty and fearless innocence if I can help it...that’s where the magic lives...
Wow. You look so confident on stage, I would never guess you were nervous. But I think that's awesome that uncertainty is where the magic lives. I never thought of it that way before. Well said!
How many instruments do you play and how did you learn to play them?
Music always sort of made sense to me intuitively and I played by ear. Traditional lessons didn’t quite work for me and it’s only in the last decades that I’ve embraced the theory, mechanics and technique involved so I could be a better composer and bandleader. At 2, I was drawn to the family piano, then at about 12, I took over my mom’s acoustic guitar. When I was 26, I bought my first horn - 15 years after the 5th grade band teacher told me “girls don’t play the saxophone”...showed him....haha
That is amazing! Girls don't play the saxophone? Yeah...you showed him all right!! What’s the best part about being a performer?
Music has always been my therapy - where I emotionally balance myself. It’s my safe zone...and then there’s the incredible moments I get to have and share musically and personally with people all over the world. I’ve played a gig in every state and I’ve been able to travel abroad to places I never thought I’d touch...what a gift. 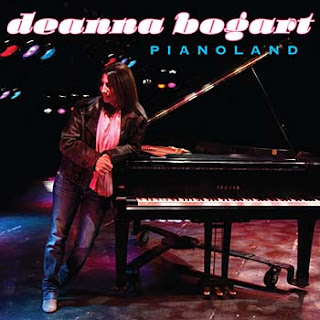 You have such an appreciative, postive attitude about your life and your gift. No wonder people all over the world respond to you and your music. What’s your latest release and where can we get it?
My latest release is called Pianoland on Blind Pig records and it’s available at Blind Pig Records Amazon  iTunes and of course Deanna Bogart's web site
Thanks so much for stopping by today, Deanna! And thanks for inspiring the music behind Hereafter, my latest novel.
About Deanna:
When it comes to Deanna Bogart, everyone wants to claim her as their own -- her hometown, her fans, her fellow musicians and even her instruments. She's that good–and that good-natured.
Born in , Deanna spent her early years in and , climbing on any available piano bench to plunk and play with preternatural panache. Around the age of six, she was "gently removed" from the Brooklyn Conservatory of Music for playing piano by ear instead of learning to read music. While in middle school, Deanna yearned to play the saxophone. Typical of those times though, she was told, "Girls play the clarinet, not the sax." Thankfully for us all, that tide has changed.
Today, Deanna Bogart is an award-winning multi-instrumentalist and multifaceted musician whose fans value the diversity of her genre-free zone. As a bandleader/singer/songwriter/producer/pianist/sax player, Deanna combines the best of boogie-woogie, contemporary blues, country and jazz into a splendid blend she calls “blusion.”
Deanna's fusion of blusion -- spontaneous, sophisticated, fearless and fun -- has garnered her three consecutive Blues Music Awards' Horn Instrumentalist of the Year for 2008, 2009 and 2010 and an endorsement contract with Rico Reeds. She has won, at last count, more than 20 Wammies, the music awards for the hotly contested region.
Recognized for her dazzling keyboards, soulful saxophone, smoky vocals and cut-above songwriting, Deanna easily wins the hearts of fans on land and at sea on chartered cruises. She is a featured player in the Legendary Rhythm and Blues Revue, jamming with Tommy Castro, Magic Dick (founding member of the J. Geils Band), as well as prominent guitar slingers. Deanna remembers well her early years as a budding musician and is an avid educator and mentor, sharing her insight and wisdom with students of all ages.
Perennially popular with a knack for engaging her audience, Deanna has played for troops in , and as part of the “Blues on the Nile” tour, including performances at , the Cairo Opera House and even a historic concert at the Great Pyramids.
Deanna Bogart's latest ventures include Blind Pig Record's "Pianoland," a newly minted DVD called "Everybody Has A Story," and “11th Hour,” a CD released on Vista Records, a company she co-founded.
Posted by Joya at 9:09 PM

What a great interview! Thank you both. It's great to "meet" you, Deanna. Wishing you the best.

Diane! You're so sweet to stop by. Glad you liked getting to know Deanna. Really great music. Thanks! :)