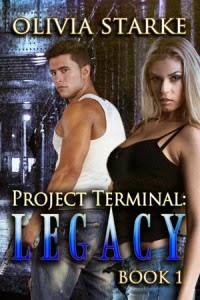 
Zombies and super soldiers? Laura is the one hope for a world gone Hollywood crazy.


In only a matter of hours Laura Swift has been bitten by a zombie, rescued by Mr. Tall, Dark, and Foreboding, and thrown into a world gone Hollywood crazy. She has no choice but to follow Damian into his underworld of manipulated viruses and genetically altered super soldiers. Even as her life hangs in the balance, she can't deny the attraction she feels for the incredibly sexy and thoroughly imposing Infantryman.


Damian Gonsalves believes he has a cure for the virus changing innocent people into bloodthirsty undead. Within Laura is the key to stopping the horrific plague. All he has to do is keep her alive and safe, and stay one step ahead of those pursuing them. Her stubbornness frustrates him to no end, while her body drives him to distraction.


When they discover the secret behind Project Terminal, will they survive long enough to help stop the unleashed horror? Or will they just be two more victims of a virus threatening all of humanity?


"The progression will snowball from here." His voice dead, he continued to stare at some unseen view.


He'd kissed her with such passion, now he spoke without emotion. How could someone do such a turnabout? The lousy bastard. Rage, white hot in intensity, shot through her, her head swimming with it.


"Maybe you're just stupid, Damian. Stupid for allowing a zombie thing to attack me. I wouldn't be dying if it wasn't for you. You deserve this, not me." Her fists balled at the injustice of it all. "You should die for this."


She sucked in wheezing breaths, unable to fill her lungs, and fell back on her butt. Her eyes widened, searching a darkened corner of the room, a distorted face appearing from the shadows. It grinned with broken, yellowed teeth, its eyes glowing in the dimness.


She gagged over raw terror.


"Oh my God, I saw something over there." She scrambled backward. "Damian, one of those things is in here."


Damian glanced around the sparsely furnished room. Other than a few flies and mosquitoes buzzing around them they were alone.


He closed his eyes, the weight of guilt pressing down making it difficult to speak. "We're alone, Laura. Nobody else is in here."


The night wore on, and fits of anger mingled with her confusion. Several times he'd had to prevent her from dashing out the door. He paced the confines of the living room, waiting for the last of the madness to run its course. Laura lay on the floor, lashing out toward some unseen attacker, before her breathing became rapid, labored pants. White foam bubbled from her mouth.


He pinched the bridge of his nose, turning away. He'd become disillusioned with the system he'd given his life to shortly after discovering they'd screwed up royally in creating the virus. In a lab he'd watched a man succumb to it, changing into a soulless corpse. It'd been horrific the first time he'd witnessed it. Afterward Headquarters had assigned him to track down an infected woman outside of the facility. It was his duty as a super soldier to clean up their mistakes. Now he wanted nothing more than to see the lab destroyed, something he should've done in the first place. He should've listened to Doug and Max, two of the doctors from the early days of the project. Their warnings had come to pass, but he'd been a stubborn, misinformed jackass.


Curled in the fetal position, Laura looked like a sick child, fragile and broken. His throat constricted, even though it was ridiculous to have feelings for someone you didn't know. He was military, Army Infantry, for Christ's sake, he knew how to pull a trigger without regret.


Laura rolled onto her back, staring toward the ceiling with glassy eyes. Despite the tremulous hold she had on life, she was already dead.


He existed as a government killing machine—an automaton they'd designed. Nothing more. He'd given his humanity away to the project. He wasn't much better than the corpses he hunted.


"I'm so sorry this happened to you, baby. You were right, I deserved this, not you."


His vision blurred when he stared down the barrel, the silencer aimed squarely between her eyes, his heart beating a crazed rhythm in his chest. His finger squeezed ever so slightly on the trigger. Outside a mourning dove called to its mate, a haunting song echoing in the room. He recalled a story from his youth about how a dove would arrive to carry a person's soul to the afterlife. If he believed in anything but the here and now, in that moment he would've thought it true.


He lowered his arm and thumped the butt of his gun against his thigh, waiting for the monster to appear. When she became the undead, when she moved to attack him, he'd have the power to destroy her. She deserved one last try to get the best of him. Maybe it wasn't Laura anymore, but he'd honor the fighting spirit within her. She'd never get past him, but if she took a piece of him in the process he'd have an excuse to end the whole goddamned thing here, in this stinking house. If he ever got infected his duty would be to put a bullet in his own head.


Her eyes popped wide open, her back arching. She sucked in a breath as if surfacing from deep waters. He turned his body sideways, leveling his gun in dead aim, waiting for the corpse to lunge.