Welcome, Ava! Congrats on your new release. So glad you had time to stop by today to chat about your book. Tell us a little about yourself.


Thanks so much, Joya, for having me on your blog today. I’m really excited to share how my debut contemporary romance novel NORA ROBERTS LAND came about. Yes, you heard that right? It has Nora Roberts name in the title. Nora is in my local writing chapter up here in the Washington Metro area, and when I had the idea for this story, I told her all about it and received her blessing. So totally awesome!


Well, what does Nora have to do with my novel you might ask? Actually, it’s based on what happened when my sister was getting divorced. Her now ex-husband blamed their divorce on her reading too many Nora Roberts novels, saying they put ideas in her head about happily ever after. Can you believe that? Well, I finally realized this would make a great story. My character, Meredith Hale, returns to her hometown to debunk her ex-husband’s notion that Nora’s novels caused their divorce. She’s going to prove happily ever after exists, or what I call NORA ROBERTS LAND, by finding her own steamy hero in her small town of .


This is the first book in the series. On August 13, the next book comes out. It’s called FRENCH ROAST and is the story of Meredith’s sister, Jill, a small town business wiz, who teams up with her childhood best friend to start a restaurant—a guy she’s had a crush on for years. I’m really excited about this next book in the series since much of the foodie-related items are drawn from my time as an apprentice and private chef.


So that’s a nice segue to what my hobbies are. I love food—eating it, cooking it, and shopping for it. And writing, of course. I also sculpt, swim, and love to travel.

Wow, that's a really interesting background to your story. Very cool that Nora Roberts supports your story idea. In general, what inspires you to write?


Honestly, I don’t need any trappings. Heck, when I was working in my old career, I was writing in war zones. My inspiration comes from my emotionally compelling characters who know how to be funny and heartfelt. They tell me their story, and I write it down until they tell me it’s perfect. They’re slave drivers really, but when they’re your best friends, you’ll do anything for them, right?
Good point! If you wrote in war zones, I'd imagine you can write any where, under any circumstances. What would be a *perfect day* for you?
Wow, a perfect day for me is being happy for no apparent reason. I love those days. Nothing ruffles my feathers. I can sit back and simply enjoy everything that is my life. Laugh simply because I feel like it.
Oh, and meeting Oprah. That would also be a perfect day. Hah! Since I’ve already met Nora and see her a little here and there through chapter events, I can’t say her anymore.
For sure! Sheesh. You've met Nora and then you COULD meet Oprah. Now that's what I call fun company! Can you tell us about the setting of your release? Why did you choose it?
Ah, my small town of is so awesome! I even drew up a map of it and all the local shops, which is in the front part of every book in the series. I’m originally from a small town and from small town people, so that’s the kind of place I wanted to write about. I loved the idea of having small, independent businesses with local color like Don’t Soy with Me, the heroine’s coffee shop in FRENCH ROAST, or an Irish bar called Hairy’s because the owner filled in the business license wrong and the name stuck. Since NORA ROBERTS LAND is centered around my heroine going home to help their family newspaper, I took a page out of our family history. Our family has a newspaper in a small town in the . In many ways, Dare is my ideal small town.
I love small towns! What a neat idea for a setting. What’s the most romantic thing anyone has ever done for you?
Wow, that’s a tough one. One that stands out is having a really romantic gourmet meal cooked for me. Being the former chef, not too many people cook for me, so this was super special—and nerve racking for the guy. It came with fancy cloth napkins and candles and everything. And the food was really great. It’s rather like my hero in FRENCH ROAST, who cooks for Jill, making her mouth water not only from his steamy self, but also his gourmet food. Did I mention he’s a chef too? 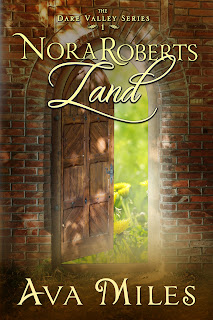 Excerpt, NORA ROBERTS LAND
Meredith dropped her gaze from Tanner’s face and studied the strong arms filling out his gray dress shirt. She remembered what those muscles looked like dripping wet. Whimpering would be totally inappropriate, but she wanted to. God, the man was as intoxicating as Valrhona bittersweet chocolate.
He put his hands on either side of her, brushing their bodies together in a wildly tempting caress. “Maybe we could go out for breakfast after our next swim.”
The idea of going out for breakfast with this man fired up her imagination about other things…like wild sex and a sleep over. She leaned back for breathing room, but there was nowhere to go. He surrounded her. She couldn’t smell anything but him, and the counter was biting into her back.
He had her body purring, but that damn wounded part of her was sounding the alarms. Her lack of confidence—courtesy of Rick-the-Dick’s hurtful parting words—clanged like a train trolley.
And Tanner was a journalist. Just. Like. Rick.
She pushed him back with a hand to his hard, muscular chest, needing space. She searched for the caramel apple pie Jill had brought home from the coffee shop and raced over to it. Her hands shook as she took out the plates and dessert forks. Deep breaths seemed like a good idea to clear out Tanner’s musky smell, but she couldn’t seem to take in a full one. Her lungs had deflated like balloons after a disappointing party.
“I can’t…have breakfast with you,” she rasped, frantically touching her bustier. Even that wasn’t doing much to restore her confidence. Damn it.
Tanner’s boots scraped across the tile floor. She could feel the heat of his body behind her, and she imagined him gazing at that mole he’d mentioned. She wanted to lean back against him, but was suddenly afraid of how much she wanted him and where it could lead—especially with her family in the next room.
“Why can’t you?”
“I don’t date journalists. Ever.”
He turned her around. She stood stiffly in his hold.
“Neither do I…usually. But I don’t want to talk about journalism with you, Meredith.”
Purchase NORA ROBERTS LAND:
Amazon  Barnes and Noble
Connect with Ava:
www.avamiles.com • facebook.com/AuthorAvaMiles • pinterest.com/authoravamiles
facebook.com/NoraRobertsLand • twitter.com/authoravamiles • plus.google.com/110201714901830875706

What a great idea for a story! Wishing you many sales.