Please welcome talented author Kiru Taye. She has a hot new release from Decadent Publishing and she’s sharing some fun details about herself today as well as an excerpt from her book. 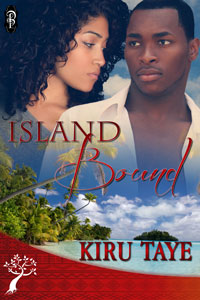 What an fascinating story, Kiru! I really enjoyed your interview. Love the story premise, blurb and excerpt! Your writing shines!

Oh, I'm the opposite. I need background noise. Silence is too deafening to me.

All the best with your new release!

Thanks, Jessica. I'm too easily distracted with background noise

I normally have a bit of background noise too but it's normally romantic mushy movies playing....just loud enough for me to hear but I don't usually watch them. Congrats on your new release, it sounds great !!

LOL, I agree with Kathleen, Jess and Krista. Your release sounds great, Kiru! It's been a fun day getting to know you and hearing about your Island Bound.

Remember to visit Kiru's blog for the Rafflecopter giveaway. A gift card!

Thank you, Krista. I sometimes have background music when I'm editing but that depends on the level of editing. Definitely not for re-writing.

Thank you, Joya. It's been fun hanging out with you.

Thanks so much for being my guest today, Kiru! Best wishes for huge sales and rave reviews for Island Bound! :)